Fact 1
The German scholars Karl Marx (1818–1883) and Friedrich Engels (1820–1895) founded the communist ideology. Communism, the social formation that was to follow capitalism, was to be built after a violent worldwide revolution starting from the most highly developed capitalist countries.
Fact 2
The first requirement of building communism after the revolution was the confiscation of the property of members of the ‘exploitative’ classes and their suppression, deportation, imprisonment and physical destruction, often together with the members of their families.
Fact 3
The Eastern Bloc disintegrated together with the collapse of the Soviet Union in 1989–1991. Communist parties did not come to power as a result of the democratic process nor did they succeed in retaining power when democracy was restored.

Communism is a political ideology born in the 19th century that set as its objective the building of a classless society in which all means of production and all that is produced is owned in common by all members of society. Private property is replaced by public property. Communism is totalitarian by its nature. Its objective was the subjugation of the whole of society to ideology and the exclusive leadership of the Communist Party.

The social system based on communist ideology is also referred to as communism, which was supposed to be the ultimate aim of social development.

Communist terror. The first requirement of building communism after the revolution was the confiscation of the property of members of the ‘exploitative’ classes and their suppression, deportation, imprisonment and physical destruction, often together with the members of their families. Tens of millions of people fell victim to it in the 20th century. 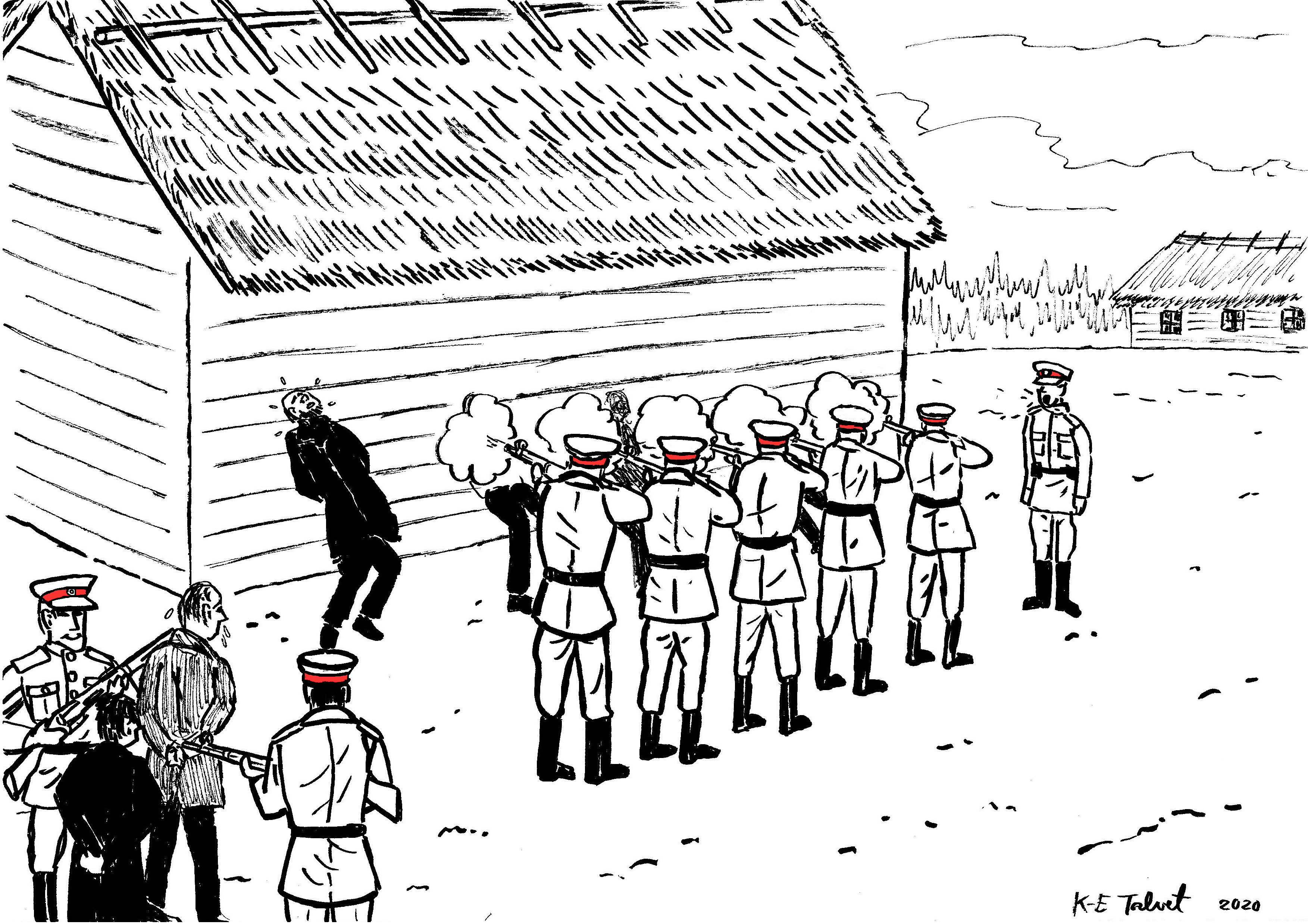 The dictatorship of the proletariat was established after the victory of the revolution. The Communist Party’s Politburo ran the state, but an attribute of power was the compulsory elections at all levels of power with candidates selected by the Party leadership who belonged to the ‘block of communists and non-party members’. Election results were rigged in order to achieve the predetermined result.

Industrialisation, collectivisation and cultural revolution were the forced modernisation of society for the creation of the ‘material and intellectual base’ for communist society. This meant the preferential development of industry, especially heavy industry, the replacement of individual farm holdings with collective farms, and the subjugation of education, culture and science to communist ideology. 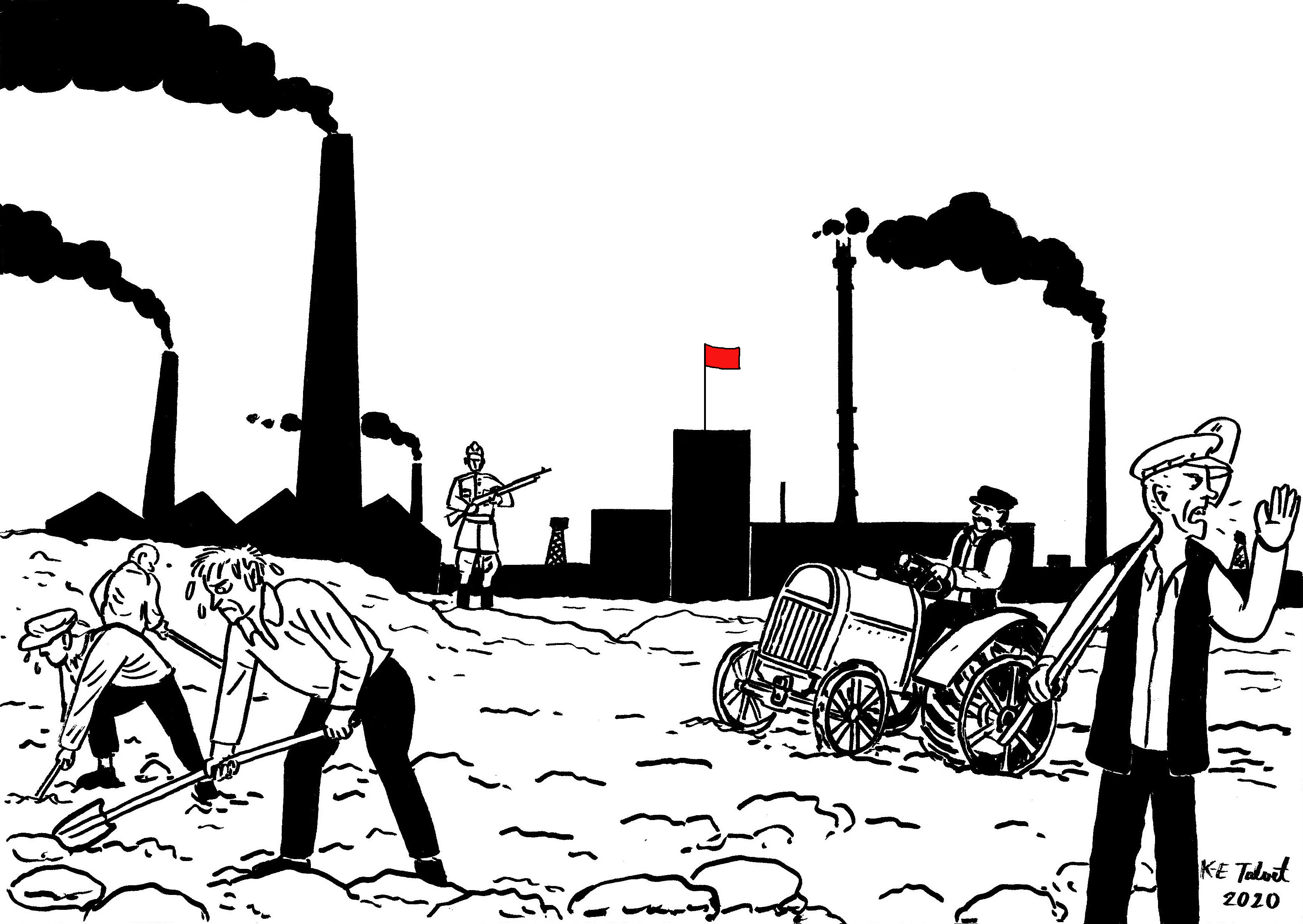 The German scholars Karl Marx (1818–1883) and Friedrich Engels (1820–1895) founded the communist ideology. Communism, the social formation that was to follow capitalism, was to be built after a violent worldwide revolution starting from the most highly developed capitalist countries. The most progressive class, the working class, was to build communism under the leadership of its avant garde, the Communist Party, under the conditions of the dictatorship of the proletariat. The state was supposed to disappear over time in communist society. 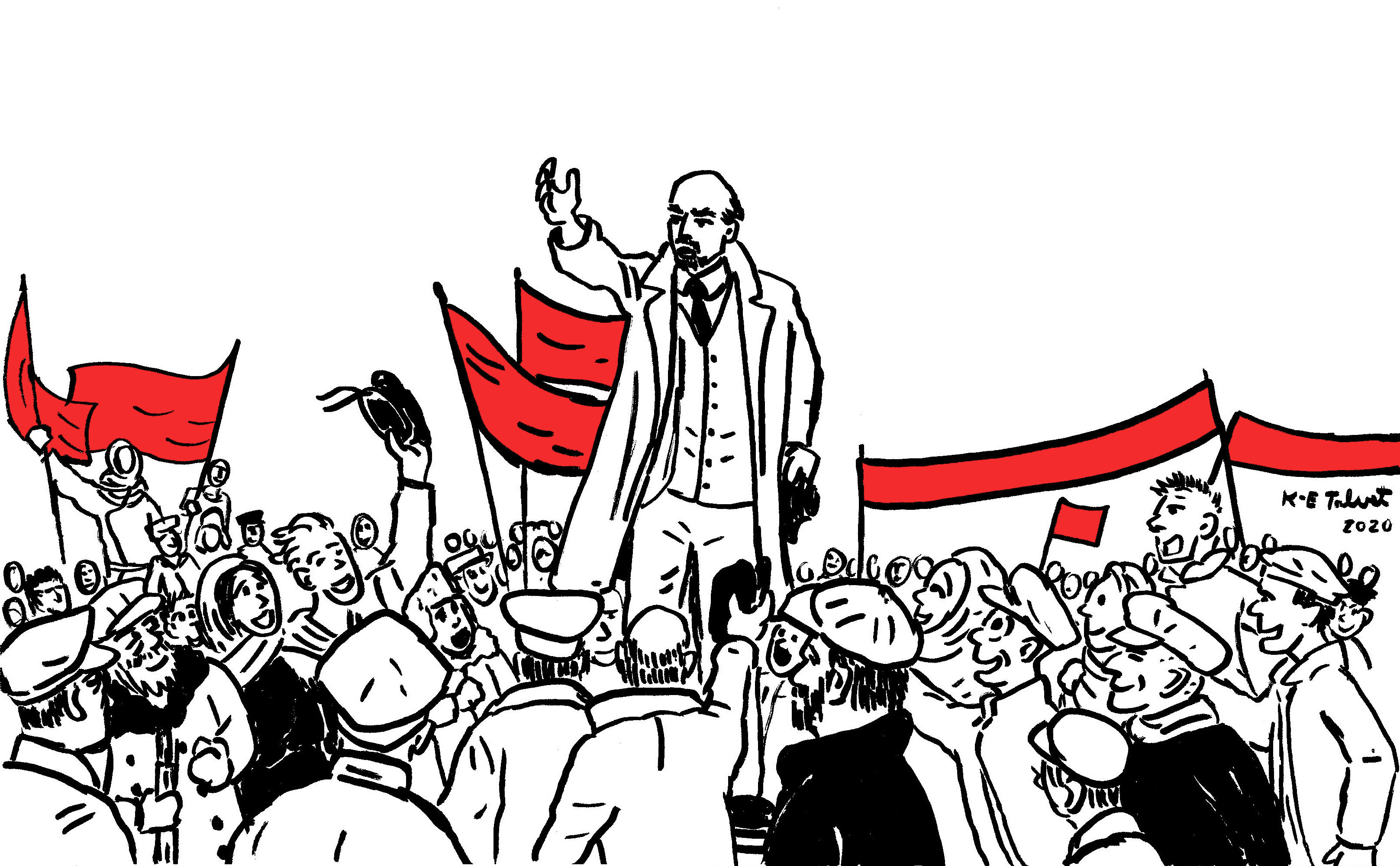 Communists hoped that the worldwide revolution would break out at the end of World War I. The seizure of power by the Bolsheviks in Russia in November of 1917 was seen as the fuse for this revolution. The worldwide revolution did not break out, but the governments of a Europe worn out by the world war treated many of the uprisings of workers and soldiers that were led by communists as a real danger that could lead to such a revolution.

The Comintern founded in Moscow in 1919 was a worldwide organisation. Communist parties throughout the world operated as its sections. Jossif Stalin (1878–1953), who rose to the position of leader of the Soviet Union after Vladimir Lenin (1870–1924), the leader of the Bolsheviks, developed a theory of building socialism in one country. Socialism was supposed to be a preparatory stage in the transition to a communist system of society. At the outset of the 1960s, the leader of the USSR Nikita Khrushchev (1894–1971) announced the intention to establish communism in the Soviet Union in the 1980s. Yet the Soviet Union’s economic situation, the ‘material base’ for building communism on which the principle of distribution ‘from each according to his abilities, to each according to his needs’ would have been founded, started worsening instead in the 1970s.

Socialism in the Soviet Union, in turn, was divided into three stages:

1) the building of socialism (1918–1936) and the dictatorship of the proletariat, when the civic rights of members of the former ‘exploitative classes’ were restricted;

3) developed socialism (1977–1991): the creation of the public state and the Soviet people, in which hitherto existing nationalities were supposed to melt into one.

In 1944–1949, the Soviet Union subjugated the countries of Eastern Europe, where the socialist organisation of society was established. Communists also came to power in China. Socialism was established in the form of so-called people’s democracy in the Eastern European countries. Some miniature political parties (Christian Democrats, agrarian parties, and others) were allowed to operate under communist control, and in some countries, small private land holdings were also allowed (for instance in Poland).

Communism is an equalising ideology of redemption with its own original sin (one person’s exploitation by another) and paradise (communist society). The Party leadership established the exclusively valid truth of communism. The primary enemy of the only progressive class, the proletariat, was the exploitative classes, above all the bourgeoisie. As happens among people of the same denomination, currents that diverged from the mainstream established by the Politburo of the Central Committee of the Communist Party of the Soviet Union (such as Trotskyism, Maoism, Eurocommunism, and many others) emerged and the supporters of these variants were persecuted.

Communism considered the ascertainment of alleged laws of the development of human society to be the greatest achievement of Marx and Engels. Lenin, the leader of the Russian Bolsheviks, worked out instructions for seizing power and establishing a communist state based on the texts of Marx and Engels. His successors developed these instructions further in accordance with changing conditions. Communism claimed to be a scientific political doctrine, from which followed its alleged supremacy compared to other political ideologies. Classical German philosophy, English political economy, and utopian French socialism were considered to be the predecessors of communist ideology. The following three components of communist ideology continued to develop these three fields of knowledge: dialectic and historical materialism (philosophy), political economy (economic theory) and scientific communism (politology).

The dogmas of communist ideology were clear and simple, and students at all levels of education from primary school to doctoral studies were forced to master them. Other ideologies were forbidden and the dissemination of texts containing ‘hostile’ ideologies was a criminal offence. Communism is totalitarian by its nature. Its objective was the subjugation of the whole of society to ideology and the exclusive leadership of the Party Politburo that controlled the establishment of that ideology. After the hope for worldwide revolution had come to nothing and the ‘temporary stabilisation of capitalism’, the Soviet Union withdrew into itself, as other communist states likewise did later. Relations between its subjects and the rest of the world were obstructed.

The former elite was done away with and partially destroyed, and their property was confiscated. The new elite consisted of opportunists – many of the revolutionaries in all countries were members of the ‘exploitative classes’ according to their background – or people of humble background raised to the fore, who had rendered services either in revolutionary struggle or in war and whose education included only that which had been established with communist ideology.

The building of socialism, as a prerequisite of the forging of a communist system of organising society, lay in the forcible and violent modernisation of society. Unlike what Marx and Engels had predicted, communists came to power in economically backward countries with a large relative proportion of rural population. The objective of modernisation was to create the ‘material base’ for communism: industrialisation (the preferential development of heavy industry and urbanisation, among other things to enlarge the working class) and collectivisation (the replacement of individual farm holdings with kolkhozes and sovkhozes (collective farms), among other things to decrease the class of peasants who formerly were private owners of farm holdings). 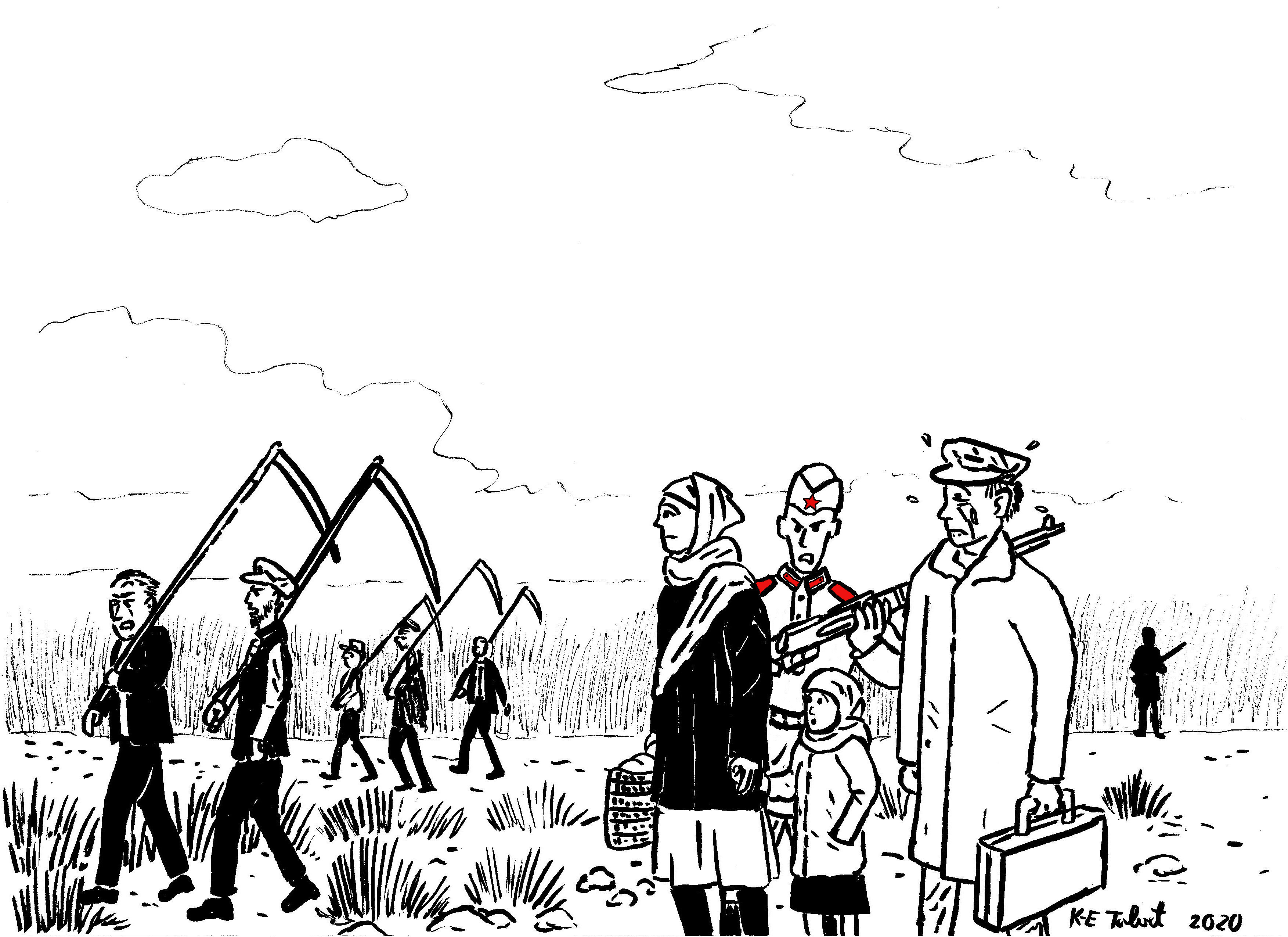 One of the consequences of both policies was food shortages and famines in many regions, with vast numbers of victims. The third reorganisation, cultural revolution, lay in the liquidation of illiteracy and the replacement of hitherto existing culture with one based on the canons of communist ideology. In science, natural sciences, the exact sciences and engineering were preferred. Social sciences were under Party control.

Regardless of its totalitarianism and thanks to vigorous propaganda, communist ideology often managed to achieve broad support for a short period of time in countries ruled by communist parties as well as outside the Eastern Bloc. Declarative anti-imperialism, anti-colonialism and anti-capitalism enticed European intellectuals in the 1960s and 1970s.

The Eastern Bloc disintegrated together with the collapse of the Soviet Union in 1989–1991. Communist parties did not come to power as a result of the democratic process nor did they succeed in retaining power when democracy was restored. Communism, which predicted the future of society according to Western Europe’s level of development in the 19th century, proved to be wrong. Communist regimes collapsed into incapacity to provide economic and social well-being. The Communist Party admittedly rules China, one of the world’s most powerful countries, to this day, but communist economic principles have largely been abandoned there.