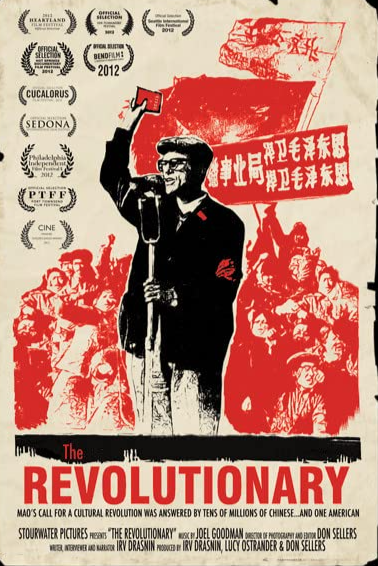 The Revolutionary is a documentary film that deals with a fascinating chapter in the history of Chinese communism: That of American communist Sidney Rittenberg, the first American citizen to join the Chinese Communist Party. By the time he left China to return to the USA in 1977, he had served almost 16 years in solitary confinement across two different prison sentences for crimes that he was innocent of. He offers firsthand insight into the ruthless political leadership of Mao’s regime, including major political and economic campaigns such as the Great Leap Forward (1958-1962) and the Cultural Revolution (1966-1976). He also discusses how he struggled to reconcile his former convictions as a communist with the senseless violence and brutality he was surrounded by during his time in China. 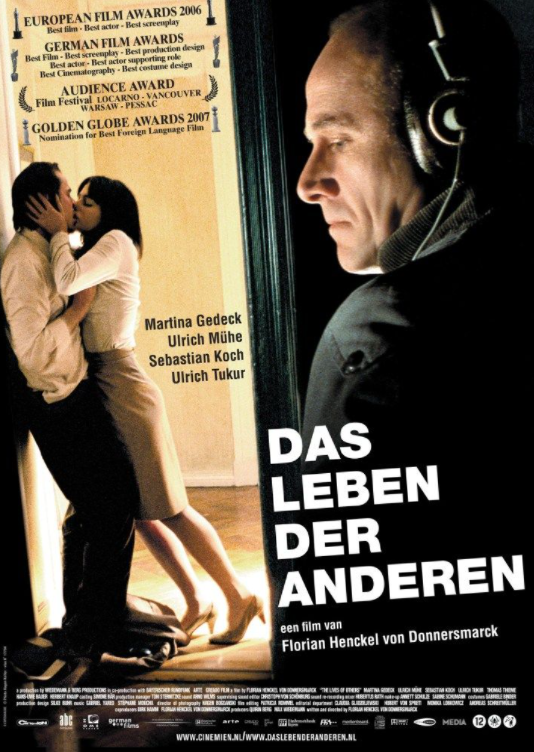 The Lives of Others

Set in 1984 East Berlin, The Lives of Others addresses the surveillance of citizens of the German Democratic Republic (GDR) by the infamous Stasi secret police. The story follows Stasi Captain Gerd Wiesler, who leads a surveillance operation against playwright and ostensible regime loyalist Georg Dreyman. However, Wiesler’s loyalty to the regime is called into question when, through the course of his surveillance, he begins to sympathise with Dreyman and his girlfriend as he learns how the GDR state has personally victimised them. The film offers some insight into the brutal methods the Stasi employed against its own citizens. Greater focus, however, is afforded to the human elements of an inhumane system; the ways in which the GDR regime drove wedges between friends and relationships, and how the perpetrators processed the sinister deeds they performed in the name of the socialist system. 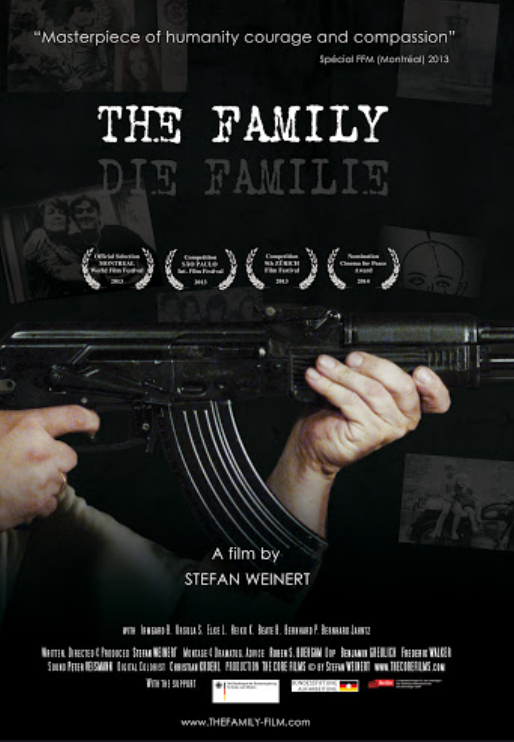 The Family is a documentary film that chronicles the stories of families whose loved ones were murdered on the border between East and West Germany under the communist German Democratic Republic (GDR) regime. Such deaths often occurred when attempts by GDR citizens to escape to the West were interrupted by the regime’s border troops, with fatal consequences for the victim(s). The film deals with surviving family members’ search for closure and justice, raising difficult questions of accountability for atrocities committed in the context of totalitarian systems. The humanity of these stories is juxtaposed against the callous bureaucracy of the regime, and in particular that of the Stasi, the state security service of the GDR. 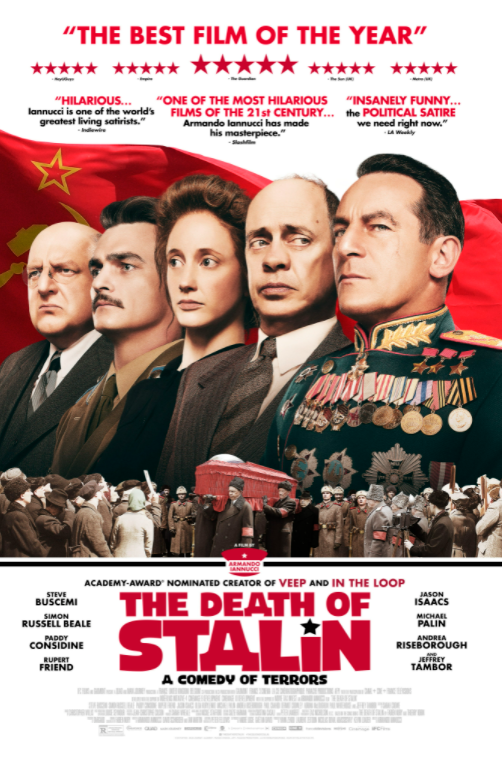 The Death of Stalin

The Death of Stalin is a black comedy film that humorously explores the politics of Stalin’s Soviet Union. Set in Soviet Russia, 1953, it depicts the dictator’s death and the subsequent struggle for power that breaks out among his potential successors. It does not pretend to embody the true historical events ‘accurately,’ and instead treads a fine line between comedy and terror to exhibit the perceived absurdity of this exceptionally violent era in human history. 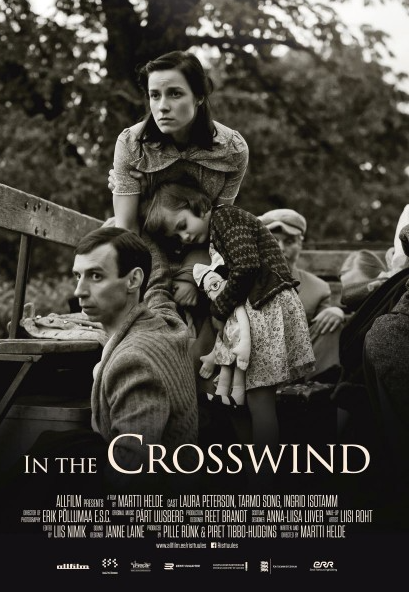 An emotionally confronting experience, In the Crosswind follows the story of Erna Tamm, an Estonian philosophy student. Along with thousands of other Estonians, Latvians and Lithuanians, she is violently uprooted from her homeland and deported to Siberia in June 1941 by the oppressive institutions of the Soviet Union. Based on real-life events, the work is an experimental approach to conveying atrocity through film, encouraging viewers to reflect on and remember the unimaginable losses suffered by the victims of these deportations. 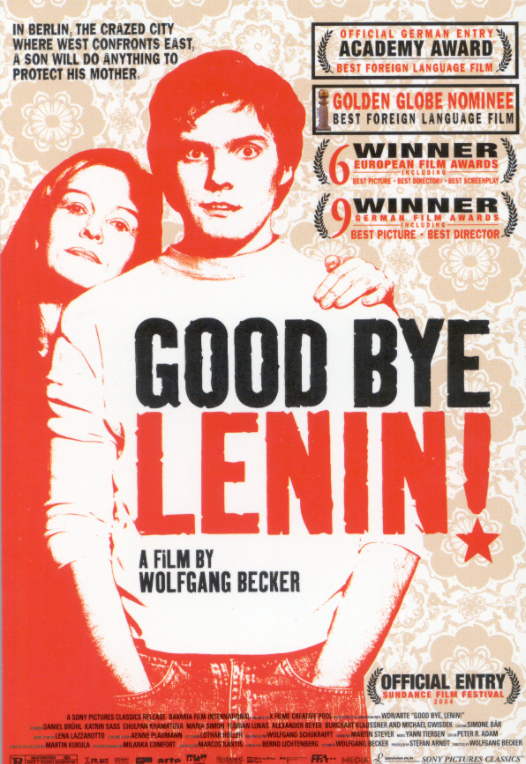 Good Bye, Lenin! is a comedic approach to dealing with the complex themes of everyday life under a communist regime and its aftermath. Alexander Kerner, a young citizen of the German Democratic Republic (GDR) swept up in the political fervour of 1989, is distraught when his mother, a strong supporter of the GDR regime, suffers a heart attack and falls into a coma. When she awakens eight months later, the regime has collapsed, and the Berlin Wall has fallen. To prevent the shock of this news from further threatening his bedridden mother’s ailing health, Kerner must go to great lengths to recreate the GDR from her bedroom. The film tackles the struggle of some East German citizens to adapt to post-communist life, and the difficult ways in which the divide between East and West affected German families. 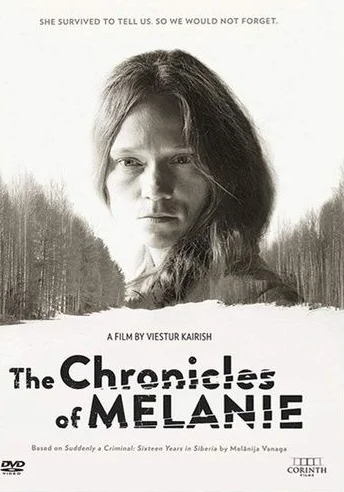 The Chronicles of Melanie

The Chronicles of Melanie is a biographical drama film based on the real-life experiences of Melānija Vanaga. Vanaga was forcibly separated from her husband and, along with her young son, deported from her homeland of Latvia to Siberia in June 1941 by the occupying forces of the Soviet Union. Vanaga, like the thousands of other Baltic people deported in this era, was innocent of any real crime, but was nonetheless branded an ‘enemy of the people’ and punished accordingly. The film features minimal dialogue, incorporating powerful visuals and an eerie soundtrack to depict Vanaga’s struggle to survive with her son in the unforgiving Siberian wilderness. Her will to live is sustained by the letters she writes to her husband, though she knows nothing of his fate.&nbsp; 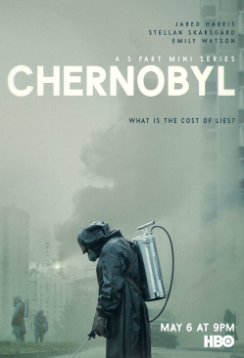 HBO’s highly-acclaimed mini-series Chernobyl is a harrowing, often confronting indictment on the Soviet system’s inability to effectively deal with the greatest nuclear disaster in human history. It tells of the extraordinary valour of everyday citizens of the Soviet Union, who meet unimaginably difficult situations in the days and months following the accident at the Chernobyl Nuclear Power Plant with courage and self-sacrifice. Protagonists range from first responders and clean-up crews (the so-called “liquidators”) to scientists and sympathetic politicians. Often, they tread a fine line between fact and fiction, where the latter is state-sponsored and the former can mean persecution and threats to one’s safety.Their endeavours are contrasted against the criminally incompetent bureaucracy of the Soviet state, who at every step undermine efforts to contain the disaster to protect their own political and ideological interests, regardless of the humanitarian cost. 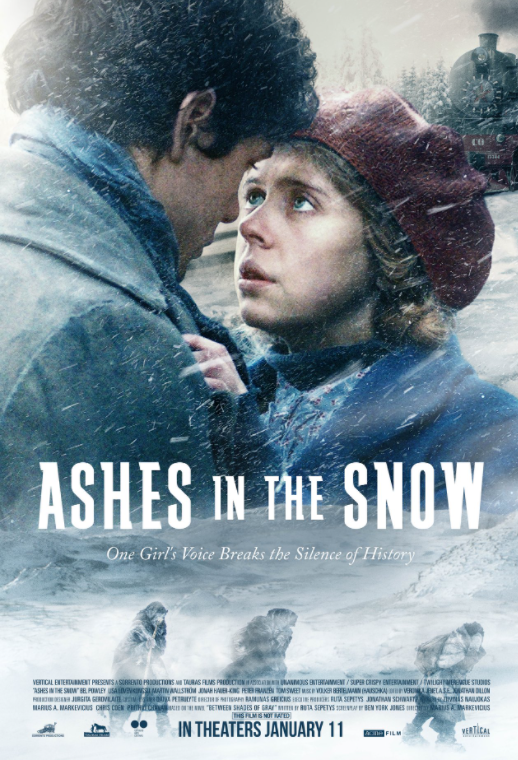 Ashes in the Snow

Ashes in the Snow follows the story of a young girl who, along with her family, is forcibly deported from her homeland of Lithuania to Siberia in 1941. A talented artist, she struggles to maintain her craft, her culture and her humanity in spite of the daily horrors and atrocities she is confronted with. The film puts a human face to the thousands of innocent people that were deported from their home countries by Soviet forces in 1941, and tells of what they had to endure to survive life in the Soviet labour camps. 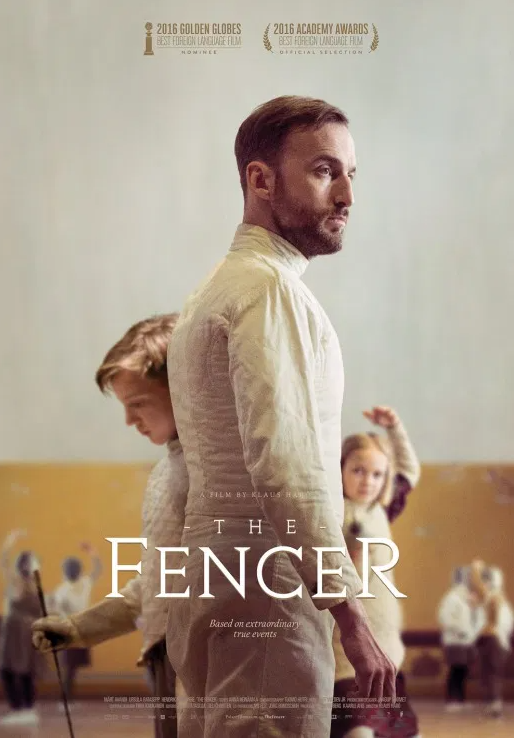 Based on true events, The Fencer follows the story of Endel Nelis, who leaves Leningrad to return to his homeland of Estonia for fear of persecution following the victory of the Soviet Union in the Second World War. Fleeing the Soviet secret police, he settles in the town of Haapsalu to work as a teacher. However, he draws attention to himself and his complicated past through his background in fencing, which he begins to teach to his students despite the school principal’s denouncement of the sport as being ill-suited to the proletarian “working man.” Accordingly, Nelis begins to face a difficult choice between self-preservation and the bonds he has forged with his students.

The Populist Dimension to African Political Thought: Critical Essays in Reconstruction and Retrieval

WR: Mysteries of the Organism

The Lives of Others

The Ghost of the Executed Engineer: Technology and the Fall of the Soviet Union

The Red Flag: A History of Communism

Nothing to Envy: Ordinary Lives in North Korea

From the Gulag to the Killing Fields: Personal Accounts of Political Violence and Repression in Communist States

The Great Terror: A Reassessment

Bloodlands: Europe Between Hitler and Stalin

The Oxford Handbook of the History of Communism

The Rise and Fall of Communism

Lenin's Tomb: The Last Days of the Soviet Empire

The Harvest of Sorrow: Soviet Collectivization and the Terror-famine

My Further Disillusionment in Russia

Escape from Camp 14: One Man's Remarkable Odyssey from North Korea to Freedom in the West

The Black Book of Communism

The Tragedy of Liberation: A History of the Chinese Revolution 1945-1957

Escape from Camp 14: One Man's Remarkable Odyssey from North Korea to Freedom in the West

North Korea's Hidden Revolution: How the Information Underground Is Transforming a Closed Society

Vietnam's Communist Revolution: The Power and Limits of Ideology

Pol Pot: Anatomy of a Nightmare

A Cambodian Prison Portrait. One Year in the Khmer Rouge's S-21

A Quarter Century of Post-Communism Assessed

Postcommunism from Within: Social Justice, Mobilization, and Hegemony

Postcommunism and the Theory of Democracy

I Little Slave: A Prison Memoir from Communist Laos

Against All Hope: A Memoir of Life in Castro`s Gulag

A Trial in Prague

One Day in the Life of Ivan Denisovich

Tovarisch, I Am Not Dead

A Pin for the Butterfly

Between Hitler and Stalin

The Autobiography of Nicolae Ceausescu

World War II Behind Closed Doors: Stalin, the Nazis and the West

The Cambridge History of Communism (3 volumes)

Comrades!: A History of World Communism

A Dictionary of 20th-Century Communism

The Collapse of Communism (Witness to History) 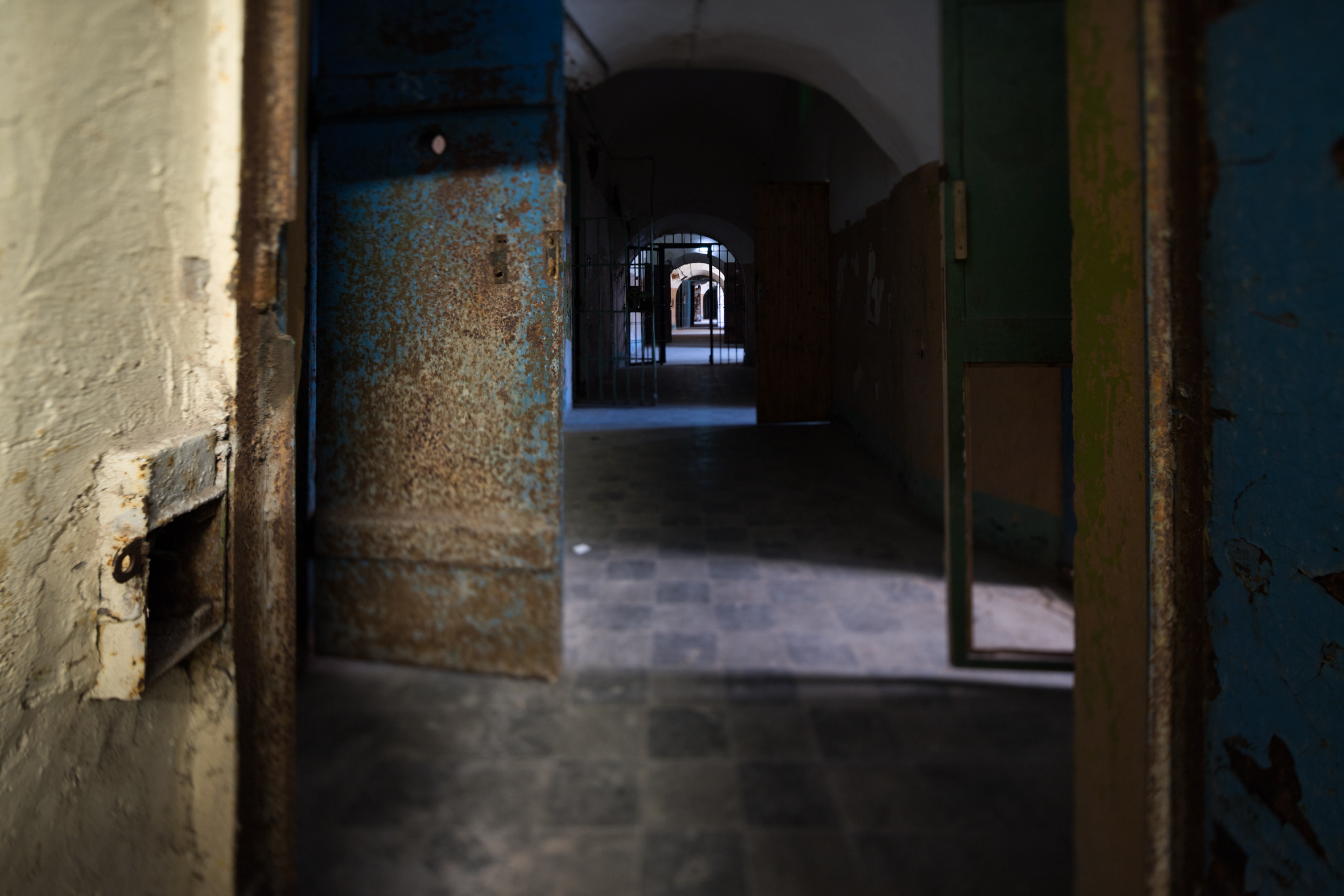 Transnational influences in the Transition from Communism

by Brown, A. for The Helen Kellogg Institute for International Studies, Working Paper 273, April (2000)